If you are a tax paying resident of New Hanover county, do you agree with having a portion of your tax dollars going to fund a program that allows people that have committed crimes to be released out of jail with a ankle monitor?  What if you were the victim of a crime, would you still want your tax dollars going to fund the program that puts a ankle monitor on a offender that offended you?  Ask your city council members what their stance is on pretrial release.

Do you know who is responsible for a offender that decides to cut a ankle monitor and run from their court obligations? The answer is simple, nobody!  Here is a picture of a New Hanover county officer looking for a defendant that decided to leave the courtroom and cut his ankle monitor and throw it away in the trashcan outside our office, notice the ankle monitor in his right hand.   I’m not saying that pretrial programs do not have a place in trying to reduce jail space but I think the people of Wilmington should be informed of what types of offenders are eligible to receive a ankle monitor that is payed for by them.  This program has expanded to include people that have been charged with violent crimes and drug charges instead of indigent and child support cases in which it was intended for. 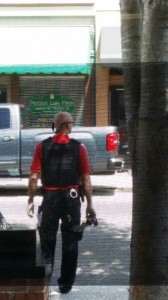